Free delivery on orders over £200

Call us for advice on your purchase

We will get you up and running
SELLING, INSTALLING AND SUPPORTING IP CAMERAS FOR 15 YEARS

Get a 360° overview or a combination of overviews and close-ups with AXIS P3707-PE Network Camera. The 8-megapixel multisensor fixed camera has four varifocal camera heads to capture scenes in various directions in wide or zoomed-in views.

Essentially a four-camera-in-one unit, AXIS P3707-PE offers a cost-effective solution for the surveillance of large indoor and outdoor areas such as in retail stores, shopping malls, warehouses, lobbies of schools, hotels and offices, and parking lots. It is also ideal for use at the intersection of hallways, aisles and roads, and at the corner of buildings.

With four camera heads in one body, AXIS P3707-PE is cost-effective, not only when compared with the price of four standard varifocal cameras of comparable performance. Installation is made easier with only one network cable instead of four. One cable also reduces the number of ports required on a switch. And the camera’s one IP address means it requires only one software license fee (instead of four) with most video management systems. In addition, the camera is powered through Power over Ethernet, which eliminates the need to access a nearby power outlet. AXIS P3707-PE also has low power consumption, using max. 5.5 W. 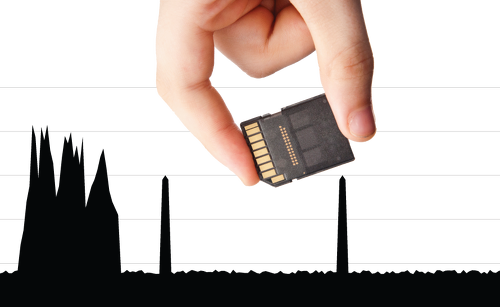 The camera supports Axis’ Zipstream technology, which is beneficial when streaming 8-megapixel videos. Zipstream is a more efficient implementation of the H.264 video encoder. It can lower bandwidth and storage use by an average of 50% or more for many surveillance scenarios. The encoding technology ensures that important details are maintained while unnecessary data is heavily compressed.

Each varifocal lens of AXIS P3707-PE allows installers to optimize the field of view to meet the surveillance requirement: wide for overview surveillance, and telephoto for zoomed-in views when greater detail is needed. For optimal positioning, each camera head has the flexibility to slide +/-90° along a circular track. Each also has a tilt of 28° to 92°. For capturing vertically oriented scenes such as long corridors and roads, each camera head can rotate 90° to support Axis’ Corridor Format.

Rotatable camera heads: (A) Line vertically positioned for 9:16 Axis’ Corridor Format for coverage of vertically oriented scenes such as hallways. (B) Horizontal position for standard 16:9 views.

Under the cover: The four camera heads of AXIS P3707-PE can together cover a 360° area, with each having a 108° horizontal field of view at max. wide and 54° at max. telephoto. (A) One RJ45 connector for the network cable. (B) Built-in microSD card slot.

Movable heads: The camera heads can be repositioned to fully cover the more than 270° area from the outer corner of a building.

Rotatable camera heads: (A) Line vertically positioned for 9:16 Axis’ Corridor Format for coverage of vertically oriented scenes such as hallways. (B) Horizontal position for standard 16:9 views.

Under the cover: The four camera heads of AXIS P3707-PE can together cover a 360° area, with each having a 108° horizontal field of view at max. wide and 54° at max. telephoto. (A) One RJ45 connector for the network cable. (B) Built-in microSD card slot. 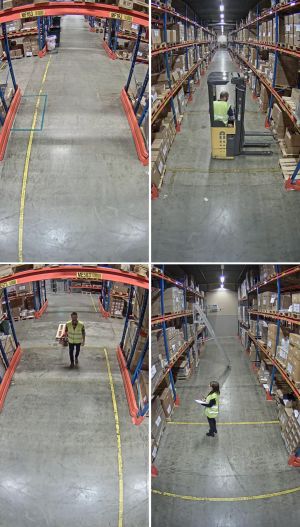 The camera supports quad view, which is a stream that captures and displays in four quadrants simultaneous video from the four camera heads.

AXIS P3707-PE camera has a specially designed clear cover that has no sharp edges. This ensures clear, undistorted views in all directions. With four 1080p image sensors totaling 8 megapixels, views from all four scenes maintain their high image quality. The camera also has good low light performance, providing color video in light as low as 0.3 lux. 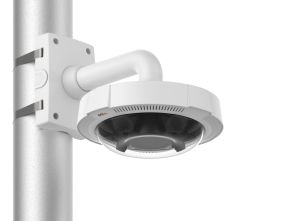 AXIS P3707-PE is designed to be mounted on ceilings and comes delivered with a ceiling bracket. The camera can also be mounted on the corner of buildings or on poles and parapets using AXIS T94M02D Pendant Kit together with most AXIS T91 mounting accessories. The pendant kit provides a weathershield and a mounting adapter. Both the kit and AXIS T91 accessories are sold separately.

There are no reviews yet.